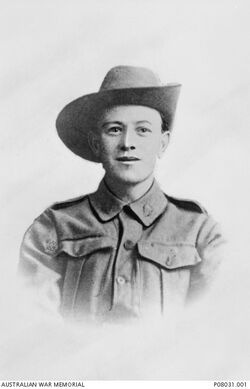 Lionel Harvey was a Norwood Forward in 1908. He played two games for the club and scored 5 goals.

Lionel Harvey had established himself as a successful and reliable goalkicker in the Norwood Reserves when on the morning of the 18th July, the regular league full forward, Joseph Chamberlain was a late withdrawal from the side to play West Adelaide. Harvey was promoted to make his league debut, having shown excellent form in the Reserves.

In the Advertiser’s report of the game, it said of Harvey, “He justified his selection by kicking 2 goals,” and “did not look out of place.” Norwood won by 44 points.

He played the following week against Sturt with Norwood again winning by 32 points and Harvey contributing three goals.

The following week with the recovery of Chamberlain, Lionel Harvey resumed his goalkicking duties in the Reserves having been a most competent replacement.

Harvey enlisted in the 48th Battalion when WWI broke out. He was a Lance Corporal and was killed in France.

Retrieved from "https://australian-rules-football.fandom.com/wiki/Lionel_Harvey?oldid=4369"
Community content is available under CC-BY-SA unless otherwise noted.